Spooky season is in full swing which means it’s now time to get your scare on. In my last post, I compiled a list of some spooky movies to watch with your friends to start the season off. But if you’re more of the adventurous type like I am, here are some great haunted attractions to visit this October. I know Halloween wouldn’t be complete for me without hitting up a few of these places with my friends. 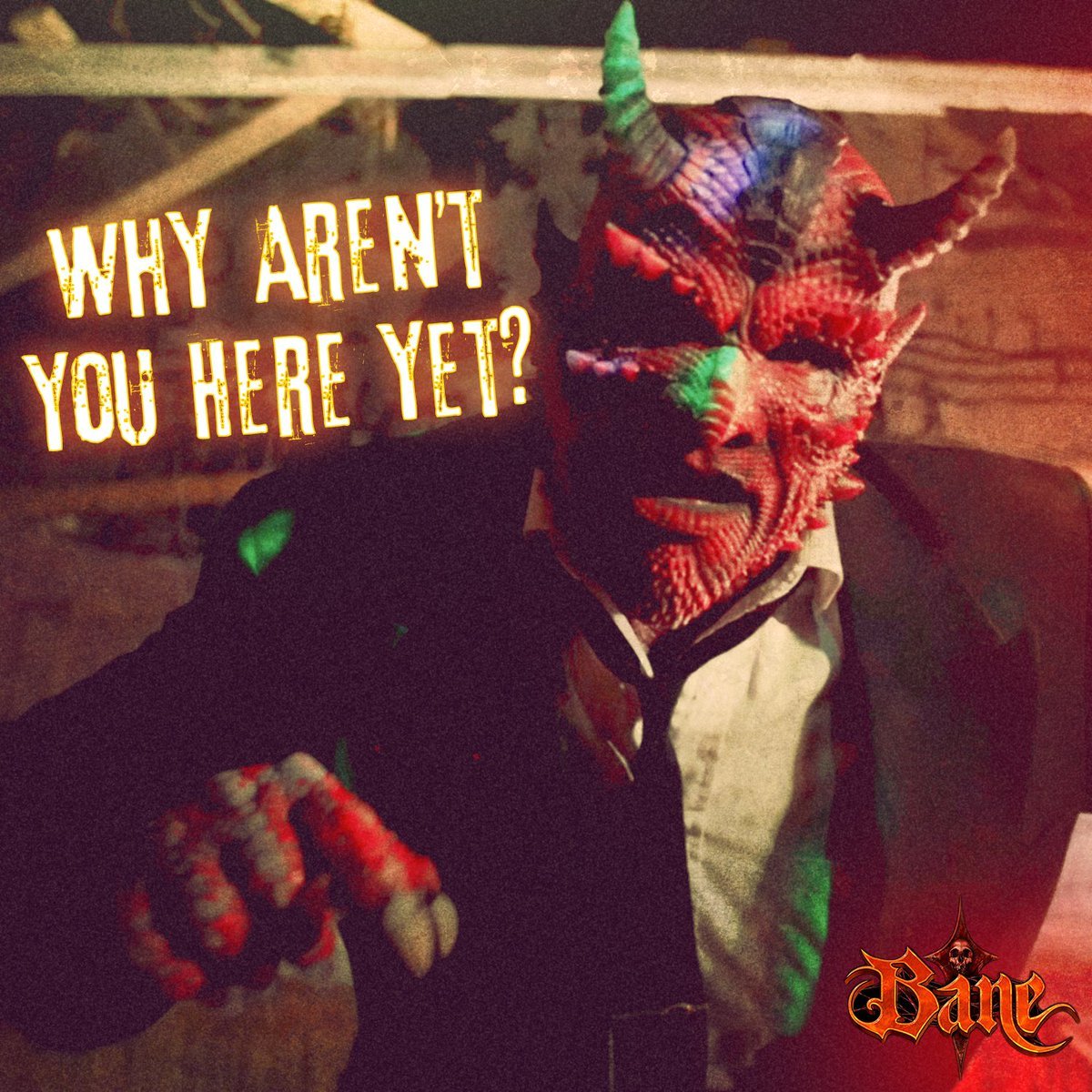 Bane Haunted House is an interactive attraction with over a 100 live actors that plays on all fears; claustrophobia, separation anxiety, clowns, and more. Inside the haunted house you may have to climb up, jump over, crawl through, and spin around whatever lurks inside. Bane has been voted the Scariest Haunted House by the Star Ledger five years in a row, and has been listed as one of the most terrifying in the nation by Buzzfeed, Travel & Leisure Magazine, and Cosmopolitan. The haunted house is open Wednesday through Sunday starting at 7 p.m., and 3 p.m. on Sundays. General Admission tickets are $35. Bane Haunted House is open until November 10, but they have escape rooms and virtual reality escape rooms that are open all year around. Bane Haunted House is located in Hell’s Kitchen New York at 618 W 46th Street, in the E&J Burke building. 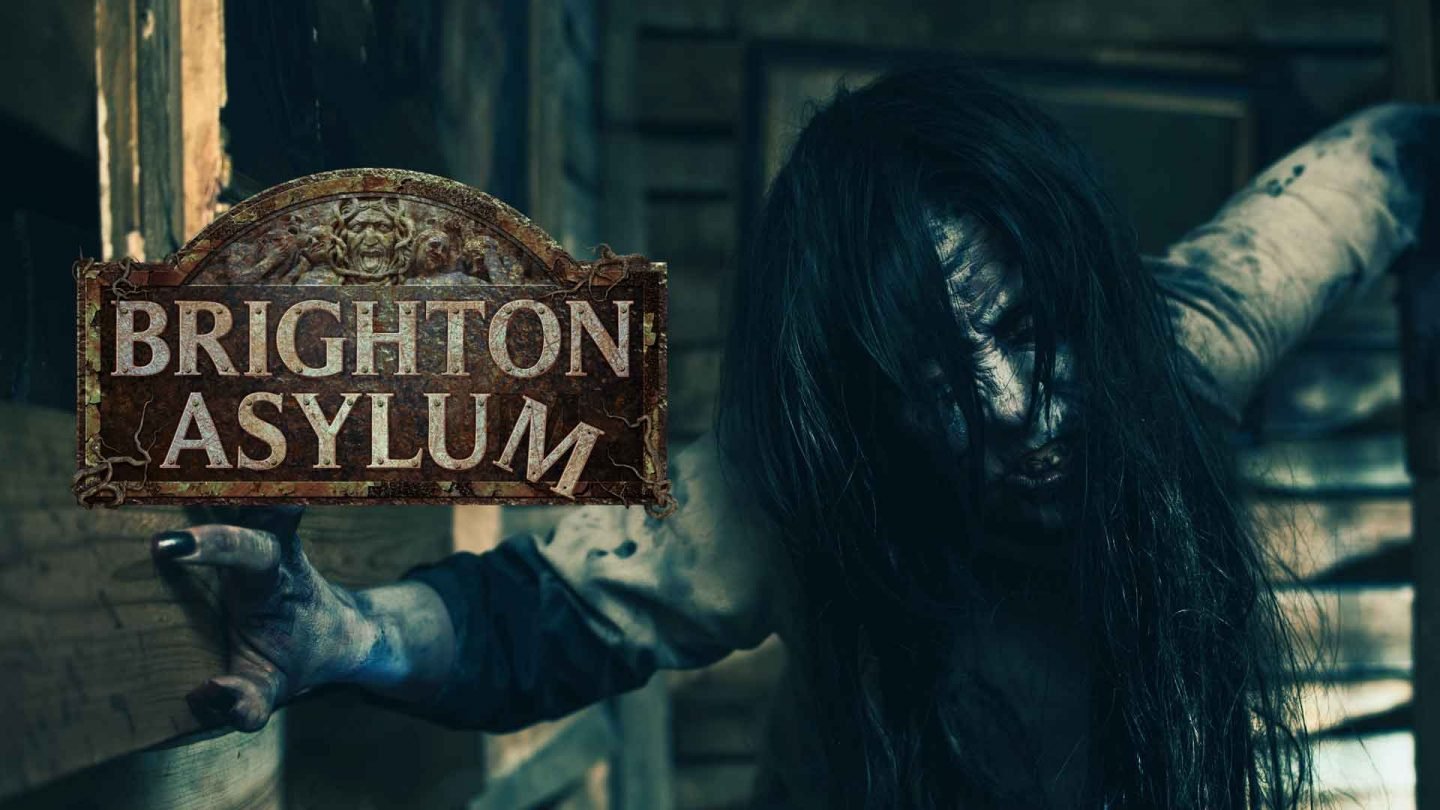 Brighton Asylum is a series of old warehouses that were previously used to house mentally unstable and psychologically disabled individuals back in the 1940s. The facility closed in 1952 after years of harsh living conditions, grotesque medical experiments, and staff disappearances. On the second floor above Brighton Asylum is the staff living quarters, where bizarre gatherings, parties, and experiments would take place. The second floor has been dubbed “The Bleeding Grounds.” Brighton Asylum is now open as a haunted attraction and has been featured on The Today Show, Cake Boss, Buzzfeed, ABC, NBC, and Fox. A general admission ticket is $35.99. A general admission ticket allows you into Brighton Asylum, the Bleeding Grounds, and the brand new PORT9L. PORT9L is Brighton Asylum’s research and development center, where you and your friends will be put through a series of tests by the asylum’s research team. Brighton Asylum is a year long attraction and is open Thursday through Sunday starting at 7:30 p.m. For the entire month of October, Brighton Asylum will be having “Slasher Thursdays,” where you will be able to come face to face with your horror icons like Michael Meyers, Freddy Kuegar, and more. On November 2nd, there will be a black out night where you and your friends will have to survive the asylum and PORT9L in complete darkness. Brighton Asylum is located at the rear of 2 Brighton Ave in Passaic, New Jersey. 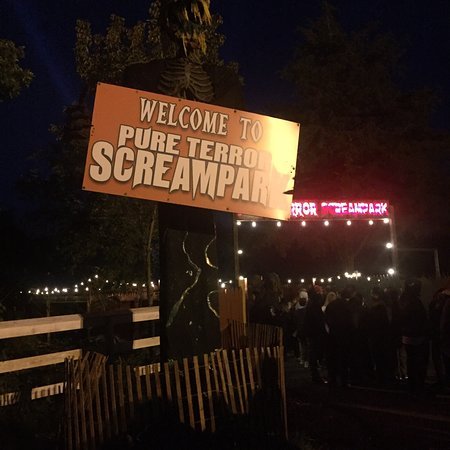 Pure Terror Scream Park in Monroe, New York is a walkthrough attraction that contains nine haunted houses and a halloween themed midway filled with food, music, great photo opps. The Nine haunted houses include Terror in the Woods, the Crypt, Resurrection Cemetery, Evil Harvest, the Coven, Terror Under the Big Top, Pure Darkness, Desecration, and Legends of Horror. Pure Terror Scream Park opened its doors on September 27th, and will remain open until Sunday November 3rd. The park is open Friday through Saturday starting at 7:30 p.m. and will not close until the last person who purchased their ticket at the box office has experienced all 9 houses. The park will also be open on Thursday October 24th and on Halloween. A general admission ticket costs $41.30 plus tax, but will allow you entry into all 9 haunted attractions. 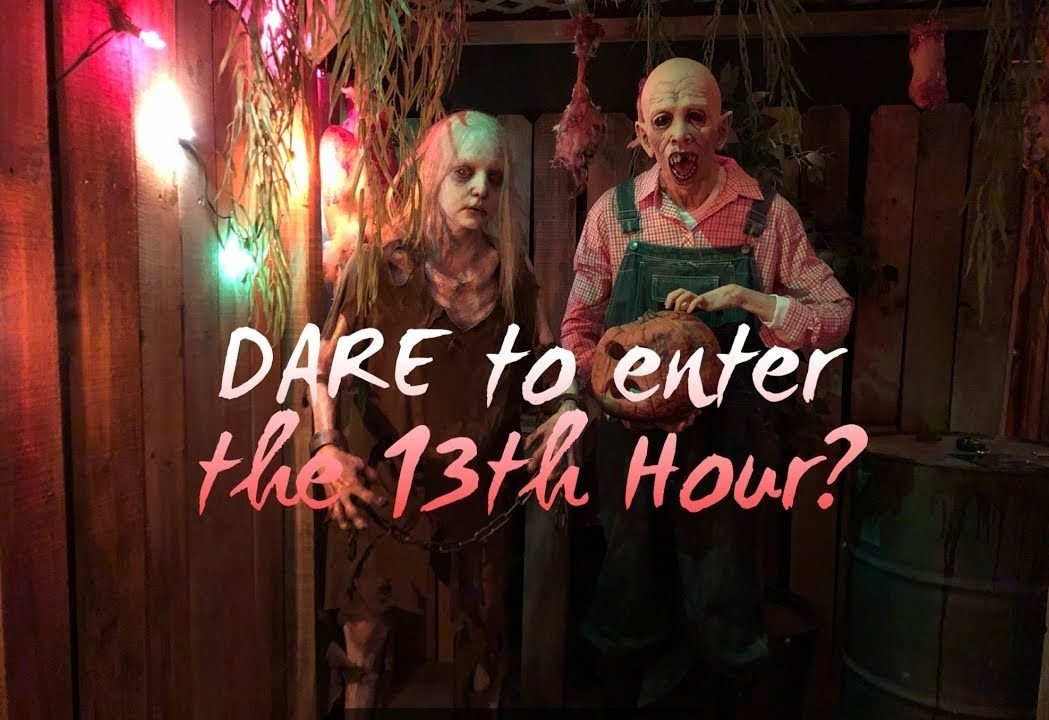 13th Hour Haunted House is located in Wharton, New Jersey at the legendary haunted Hayden House. The Hayden family and their two children lived in ordinary farmhouse and lived in confinement from the rest of the community. The townspeople began to fear the house and dubbed it the “haunted scarehouse.” The townspeople have reported strange odors from its broken windows, indistinguishable human voices and groans, and the once beautiful property began to rot. The haydens would get visitors from out of the area at odd times of the day. In the 70s Hurricane Doria hit the state, and tore apart the house leading the Hayden family to flee and never to be seen or heard from again. Journalist and investigators discovered in the house human feces, bloodstained floors and walls, battered and rusty cages from experiments, moldy food, and drug bottles with unreadable labels. Now, you and your friends can travel back in time to figure out what really happened in the Hayden House. 13th Hour has three haunted attractions, House of Nightmares, The attic, and The Darkside of the Hayden House, which you must go through in complete darkness. Admission into the Hayden House is $35. 13th Hour is open everyday from 4 p.m. to 10 p.m., but is closed on Mondays. The attractions open at noon on Saturdays and Sundays. 13th Hour also has escape rooms that run all year round. 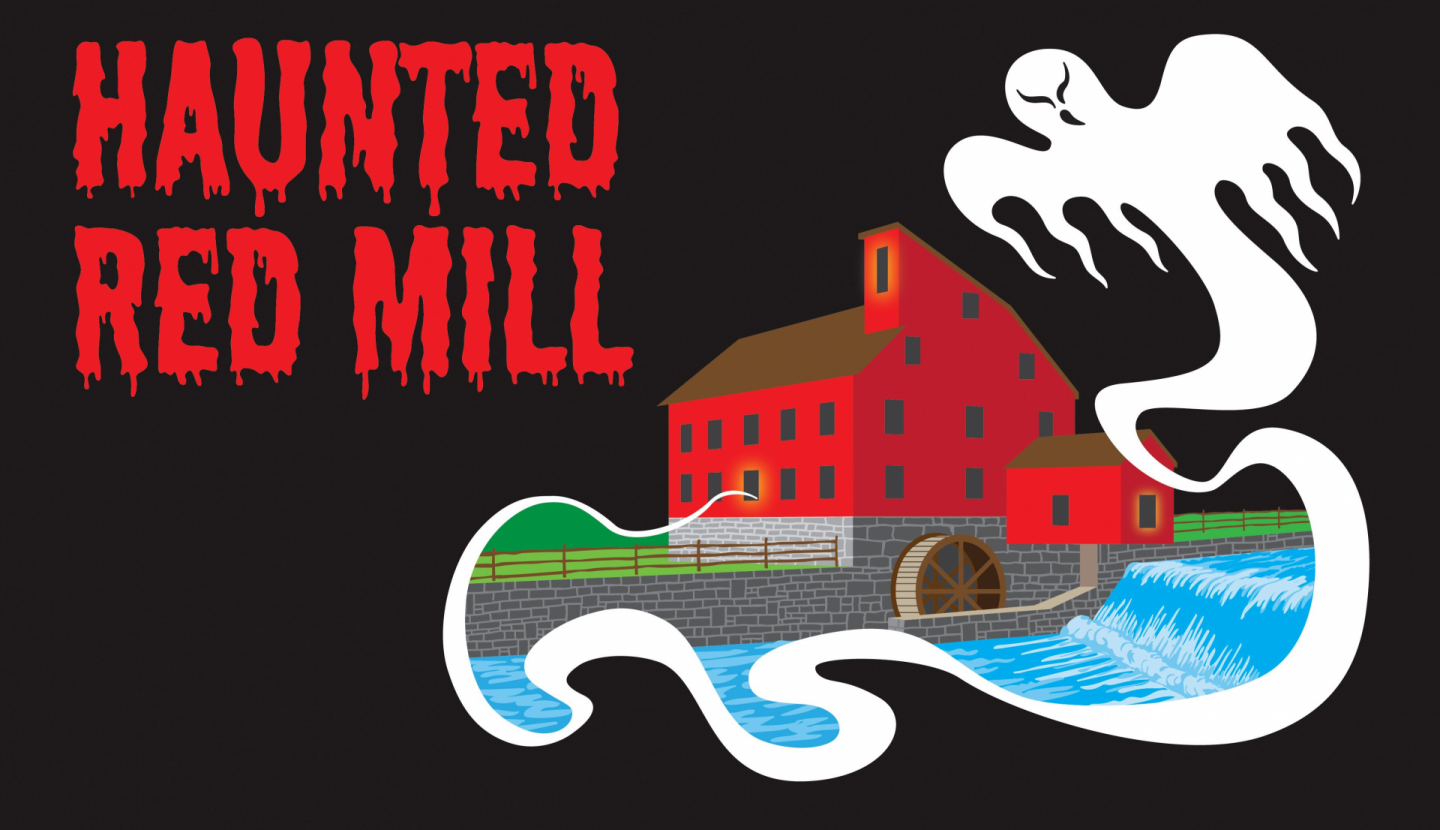 The Red Mill Museum is located in Clinton, NJ and it’s haunted house is open on October 18th, 19th, 25th, and 26th. The attraction is comprised of five sections and takes 40-45 minutes to go through. Tickets are $30, and the box office opens every day at 5 p.m. and closes at 10 p.m. The attraction doesn’t open until 7 and doesn’t close until the last person has gone through the entire attraction. The Red Mill Museum also offers a less intense startle free version of the attraction, or a “Happy Haunt” for young children. Admission for happy haunt is $10, and free for children under the age of two.

Terror Behind the Walls at Eastern State Penitentiary 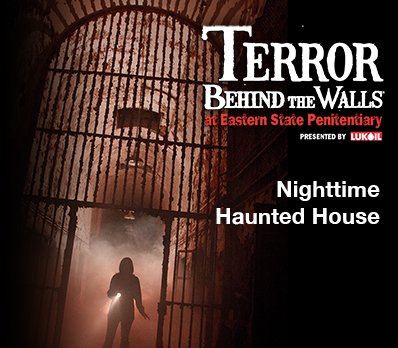 As if Eastern State Penitentiary isn’t scary enough during the day, with its gothic architecture and intimidating 30 feet high walls, it becomes even more terrifying once the cell blocks fall into darkness. It’s the perfect place to set up a Haunted House. The penitentiary has a total of 6 different haunted attractions within its walls: Breakout!, Quarantine 4D, Blood Yard, Infirmary, Machine Shop, and LockDown. The attractions are open Tuesday through Sunday starting at 7 p.m., and 6:30 p.m. on Saturdays and Sundays. General Admission ticket prices range from $24-44 depending on the day. Tickets are also cheaper if you buy them online instead of at the door. On the final two days of the attraction, November 8 & 9, the penitentiary will be having a remix night, where you must navigate your way through the attractions in complete darkness with the help of only one single glowstick. Eastern State Penitentiary is located in Philadelphia, Pennsylvania. 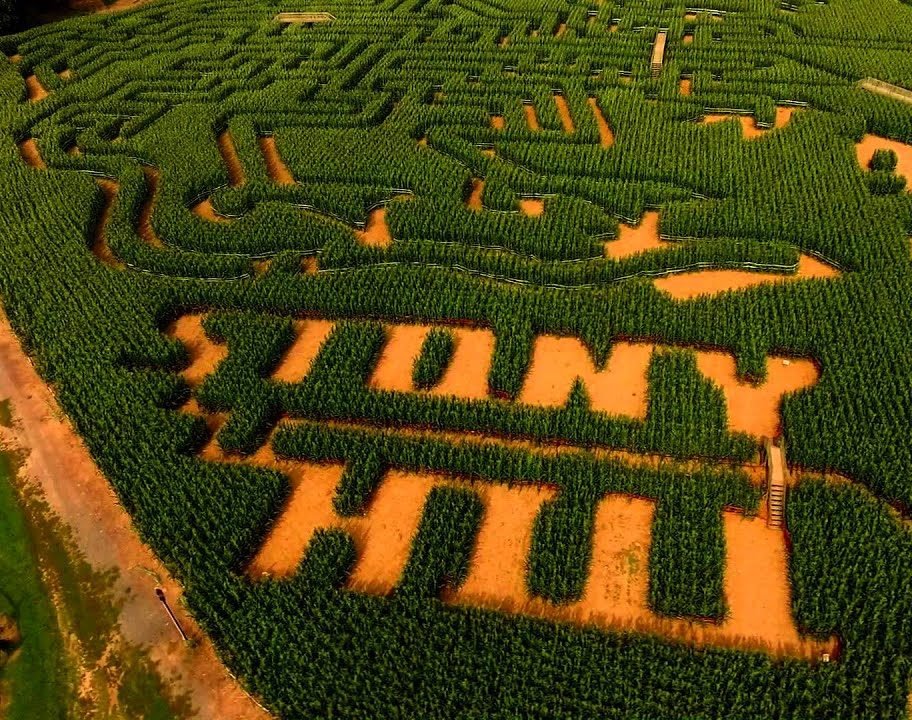 Stony Hill Farms has all kinds of mazes from corn mazes, fence mazes, rope mazes, and more for adults, families, and children. From September to November Stony Hill Farms has a 10 acre corn maze that also incorporates games within them. And as if navigating the maze during the daytime isn’t hard enough, on October 19th and 26th from 5 to 8 p.m., they will be having flashlight night where you have to navigate the maze at night with only the help of a flashlight. A general admission ticket is $14.99 plus tax. The park is open everyday starting at 10 am until 5 p.m., and 9 p.m. on Saturdays. Stony Hill farms is located in Chester, NJ. 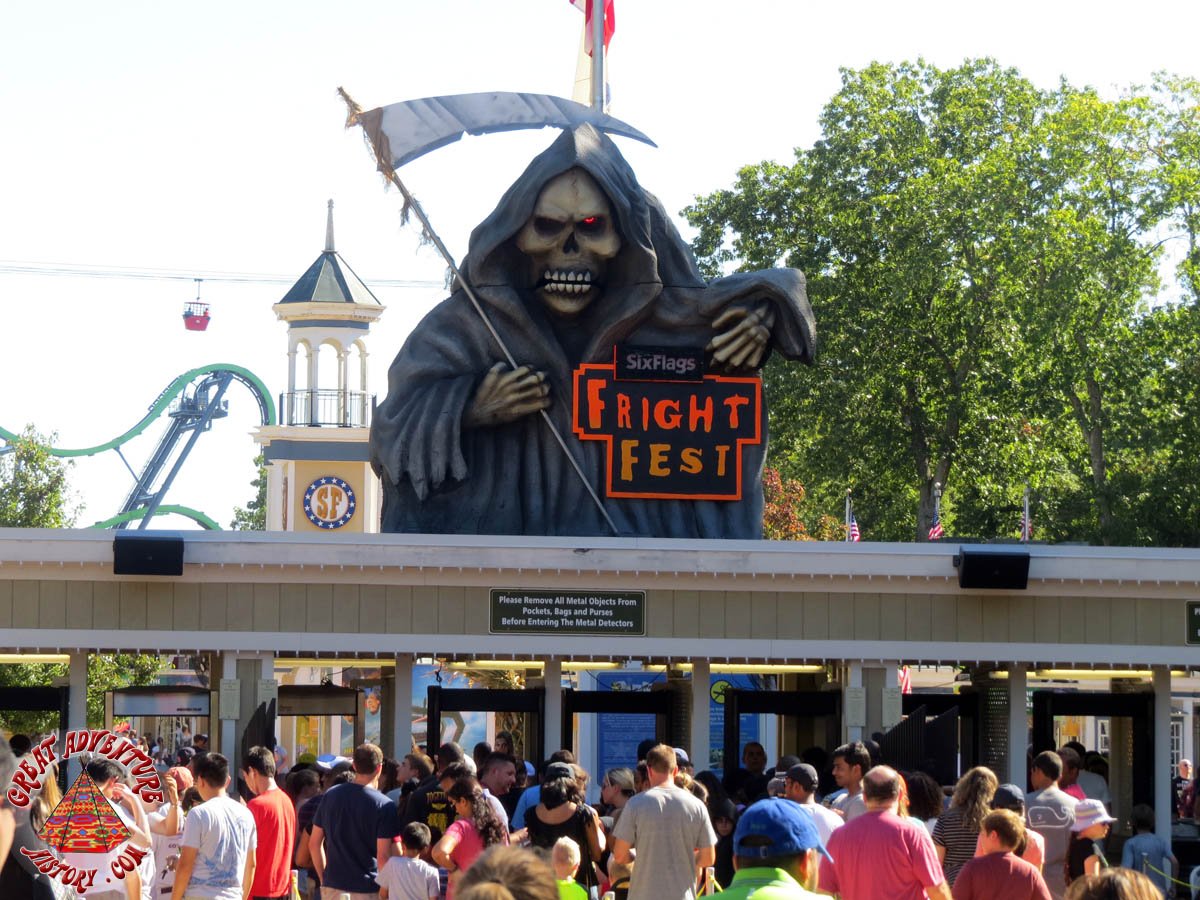 Starting from September 13th until November 3rd, Six Flags Great Adventures will be taken over by zombies and ghouls Fridays through Sundays. The ghouls are set free to roam the park freely starting at 5 p.m., leaving you no place to hide. Fright Fest offers seven haunted mazes, five scare zones throughout the park, and a variety of thrilling and entertaining shows. Fright Fest is from 5:30 p.m. to midnight on Fridays and 11 a.m. to midnight on Saturdays and Sundays. Fright Fest is open everyday during the week of Halloween. A ticket is $57.99, but if you own a season pass, admission is free and your friends can get discounted tickets. Six Flags Great Adventure is located in Jackson, New Jersey. 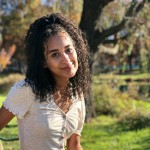 Meagan grew up in the town of Clifton, New Jersey. She is a senior at Montclair State University studying English with a minor in Film and Journalism. After taking a creative writing course her senior year in High School, Meagan knew that she wanted to be a writer, and now she is an Editorial Intern for The Clique Official. When she’s not writing you can find her creating Spotify playlists or attending concerts and music festivals. 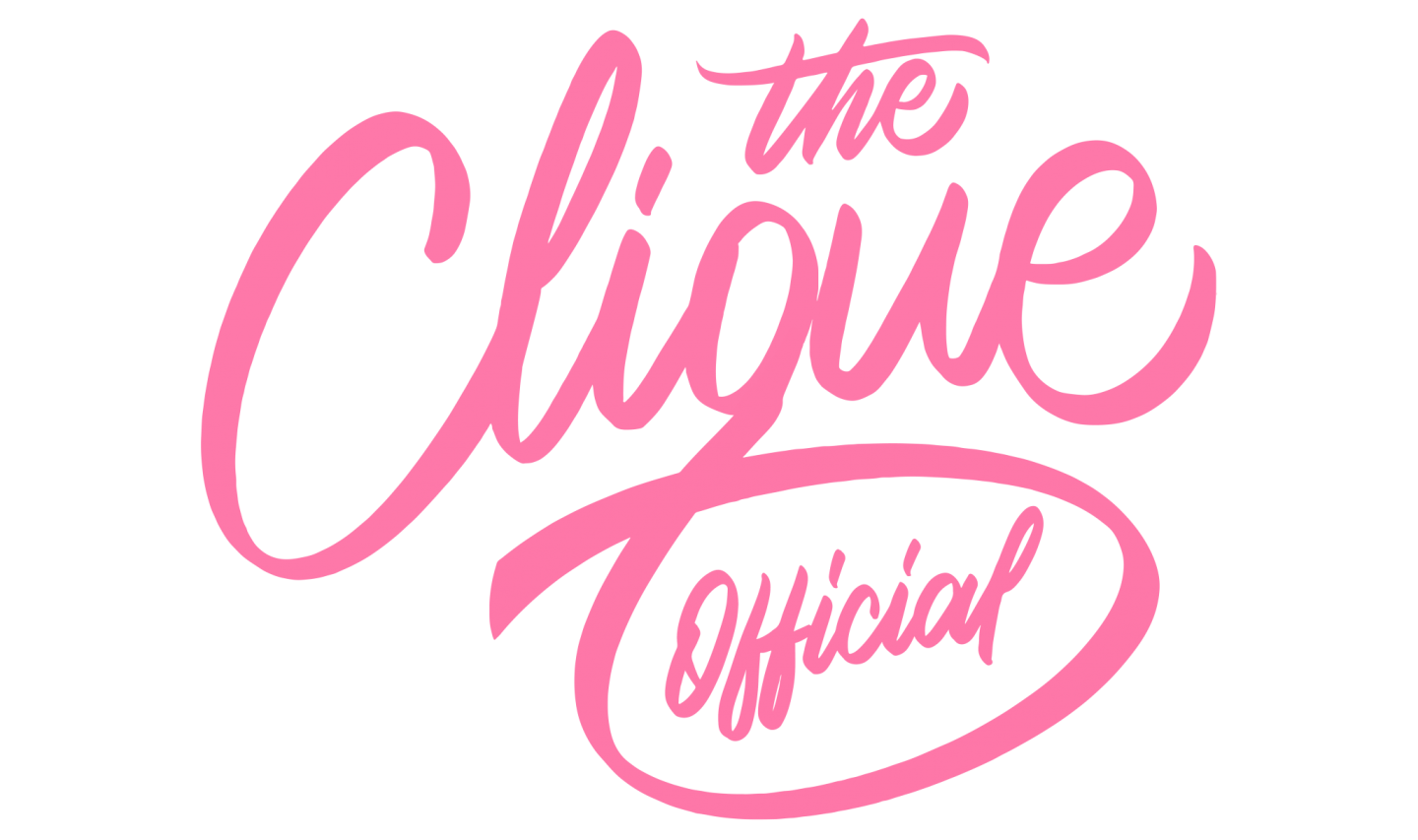